Announcement: I am NOT sending Christmas cards (again) this year

Announcement: I am NOT sending Christmas cards (again) this year (from the archives of my old blog “According to Moi”) 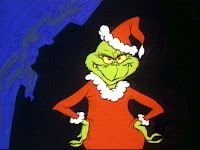 Does this mean I’m a Grinch?Not at all. I like Christmas. Not as much as Halloween, but I like it.

You can call me a Grinch and I wouldn’t mind. He’s cute, and furry and green, and, let’s face it, his theme song rocks!
I wonder if Dr. Seuss knew when he sat down to pen When The Grinch Stole Christmas that it would be a classic? I mean don’t all writers, somewhere in our private psyche, imagine that our current project will live on long after our deaths? Don’t we imagine that Literature students at an ivy-clad University in New England will study our work and our lives and gawk at the genius??
Okay, reality pill, maybe we imagine favorable reviews, four stars on Amazon.com, a few on-line interviews, and cool tweets.

Back to the topic of this post – the Christmas Cards… Historically I’ve sent a vast distribution of photo cards. Last year I was pressed with work and chores that I said, “I’ll take a year off.” A weight fell off my shoulders. So when the decision “to send or not to send” came up this year, it was a no-brainer.

But, please don’t stop sending me your cards. I love getting pictures of the kids.

In closing, some Grinch trivia: The town of Whoville and the mountain of which the Grinch lives were based on the Town of Easthampton, Massachusetts and the overlooking mountain named Mount Tom. Easthampton and Mount Tom are just north of Springfield, MA where Dr. Seuss grew up. (Thank you, Wikipedia. I’m not ashamed to admit that I’ve got a thing for you ;)