(From the According To Moi archives)

It took Christmas in the air, twenty inches of snow, cabin fever, a blinking tree, and our favorite old Christmas book for us to huddle up for story time. We used to do this a LOT more when the kids were younger. But, now with our busy lives filled with work, school, sports, playdates, TV, computer and Wii, we don’t much anymore, which doesn’t make any sense because we all love it. 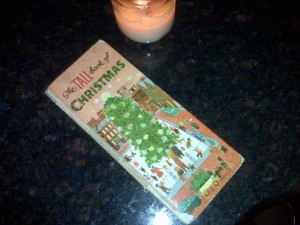 But recently the conditions were just right to snuggle and read from The Tall Book of Christmas (pictured). This well-worn book is a compilation of familiar favorites and lesser-known stories dating back to 1904. Reading together from this old book (origin long forgotten, maybe my dad’s) has become a wonderful holiday tradition. Reading is like that, isn’t it? Timeless.

The story we read was one you might not know: “The Story of the First Christmas Tree.” In it a woodcutter has lost his way in the night. The good fairies of the forest light tree after tree in the snowy woods to guide him home. I just love that…the lights in the forest leading him home. Similarly this little old book has the ability to draw us “home”…around a twinkly tree sharing a story and a peaceful heart.

My holiday wish for my friends and family is just that: Hearts filled with peace that maybe, just maybe, with the help of an occasional good story, stays with you long after the snow melts.

Christmas Trivia: “The Story of First Christmas Tree” references Santa’s eight reindeer. It’s copywrited 1948, which led me and my three fellow researchers to question exactly when Rudolph became mainstream. Here’s the answer: The character, story and song were invented as part of a retail store (Montgomery Ward) ad in 1939. While the original story is not in the public doman, rights were sold for a television special in 1964. It wasn’t until that time that Rudolph then became part of Christmas folklore. (Thank you, Wikipedia. I just adore you.)