At long last, here it is…. My third exciting piece of news:  You can name a character in LOST IN LONDON

Name a Character in My Up-Coming Book 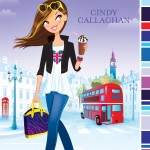 There are two characters for my book LOST IN LONDON (Simon & Schuster’s Aladdin M!x, 2013) who are currently nameless.

A little 411 about the characters:  They are British journalists – one male, one female – who have several “appearances” throughout the novel.

Do you want to name one of them after yourself?  A friend or family member?  If so, you can submit an entry to the LOST IN LONDON Character Name Contest.

HOW?  All you have to do is go to “Cindy Callaghan, Author” on Facebook and enter by clicking the Character Naming Contest icon.  (Of course, kids should get permission!!)  The drawing will be held the second week in November and winners announced on Facebook and www.cindycallaghan.com.

How exciting will it be to see your name or one you’ve chosen as part of a mass-printed book?

A little about LOST IN LONDON:  It’s a fun London adventure.  Jordan is a thirteen-year-old who leads a ho-hum life, until she embarks on a de-bored-ification.  She jets to London hoping to find an adventure; she finds oh-so-much more.  Over six short days Jordan and her posh new friends get locked in a massive department store overnight, blackmailed into conducting a cross-city scavenger hunt that takes them to amazing medieval sites and entangled with the London police.

LOST IN LONDON is published by Simon & Schuster’s Aladdin M!x, and comes out in fall 2013.