The Art of the Afternoon Tea (Part 2) By: Michelle Ardillo

And here we are with Part 2 (of 2) of The Art of the Afternoon TEA, By: Michelle Ardillo.  Cheers – Cindy 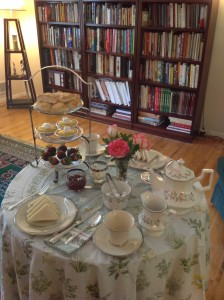 A menu of tea, sandwiches, scones, pastries, and tea cakes should whet your appetite for partaking in a traditional afternoon tea in London! The British have rather strict procedures for doing most things, and afternoon tea is no exception.

Afternoon tea is often served in “courses”, beginning with the savory items such as the tea sandwiches, continuing with the scones and cream, and ending with the sweets. Or, all of the tea foods are brought to the table at once, often on a three-tiered cake stand. The top layer will be the sandwiches, scones in the middle, and pastries on the bottom. Guests are free to eat the tea treats in any order they wish. In either case, tea is served throughout and the tea pot is refilled with boiling water as the meal progresses.

A long handled silver strainer is held over the tea cup to catch the loose tea leaves as the tea is poured. Loose tea leaves are measured by the “teaspoon” full, one for each person having tea, and an extra one for the pot! Hot water is first poured into the pot to “warm” it, that water is then poured out, the tea leaves measured and added, and boiling water then poured in. The lid is placed on top, and the tea pot is covered with a “tea cozy” to keep it warm. Tea cozies are often hand-knit and passed down from generation to generation, or sewn using quilted fabric similar to a pot holder. Some cover the entire pot while others are tailored to fit your teapot, with an opening for the spout and another for the handle.

Much has been said about serving tea. The highest ranking female at the table always pours the tea, even in homes with servants. Each cup is poured and served to the guest one at a time. The hostess always asks “Milk?” to indicate whether the guest wishes the milk added to the cup before the tea so the tea warms the milk as it is poured in, or if the guest will add the milk after the tea has been poured. Some believe this is a matter of preference, while others believe it is regional in nature. “Sugar?” is then asked, and the guest will respond with the number of sugar cubes he or she desires. Granulated sugar would not be used at a fine tea table, only sugar cubes, and it would be quite odd to find artificial sweeteners on the tea table. Paper thin slices of lemon are sometimes served as well, but are never offered if milk is taken.

Tea sandwiches, as small as they are, are consumed in several tiny bites. Scones are split open and broken into pieces so that each piece is topped with clotted cream and jam if desired, one small piece at a time. Desserts that can not be eaten in one bite are served on a dessert plate with a fork, knife and spoon. These pieces of silverware are a bit smaller in size than the ones used for eating dinner.

While having afternoon tea at the Willow Tea Room in Glasgow, with one of my Scottish relatives, a woman in her early 70’s in excellent health and quite fit for her age, I was shocked at the amount of food she consumed at the tea shop, when we had had a very sizable lunch that day and were going out to a restaurant for dinner just a few hours later. She had several cheese and tomato sandwiches, two scones loaded with cream and jam, and then, when it was time to select a pastry for the last course, she chose a meringue.  Meringues are sweetened, beaten egg whites which have been shaped into rounds or ovals and baked until lightly golden and crispy on the outside while still slightly moist and chewy on the inside. The meringue my cousin selected was two separate pieces about the size of a large baked potato, laid on a dessert place with the flat sides facing each other, and an enormous amount of sweetened whip cream was dolloped in the middle of them.  The top was dusted with dark cocoa powder and this mountain of baked egg whites and sweet whipped cream was presented to her. She polished it off in nothing flat, all the while sipping her tea and chatting away! 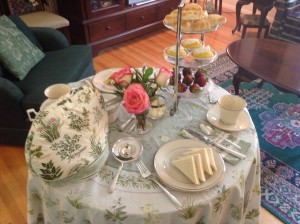