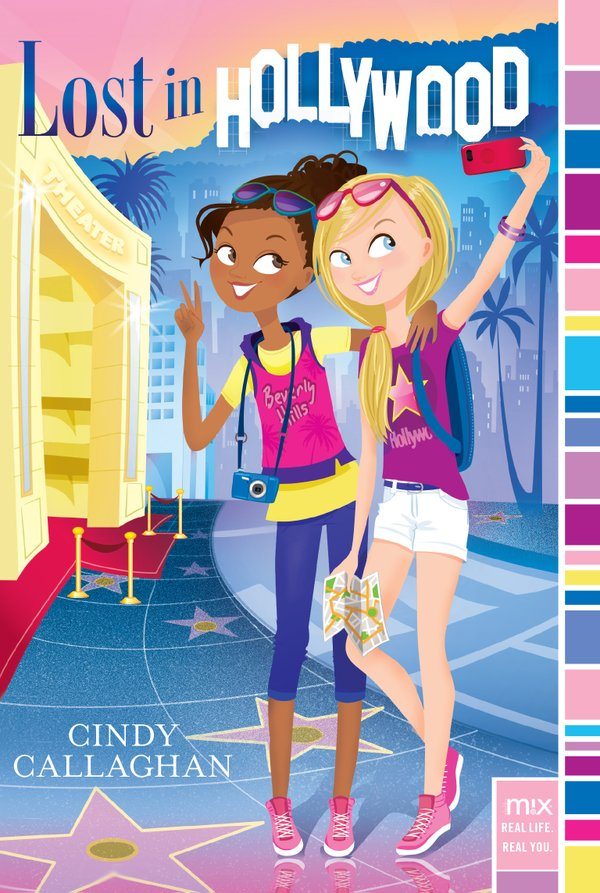 Ginger is on a mission to find her family’s missing fortune in glamorous Hollywood in this M!X novel from the author of Lost in London, Lost in Paris, Lost in Rome, and Lost in Ireland.

Twelve-year-old Ginger Carlson feels like she is the only normal one in her family. Her father is an inventor who sells his gadgets online, Mom is obsessed with classic movies, and her brother Grant thinks he is from outer space. Luckily, Ginger has a totally normal BFF, Payton, and they have big plans for the future—they plan to become doctors and open a practice together in a big city. But first, they’re partnering on the state Science Olympics where they’re sure to take home the gold for their eighth grade class with their model of the brain.

The Olympics training is interrupted when the Carlson family gets an urgent call that their eccentric Aunt Betty, a former actress who lives in Hollywood, is in serious trouble. The bank is going to take her house unless she can give them the money she owes. The Carlsons head to LA to sort things out for Aunt Betty, along with Payton, who tags along for the West Coast adventure.

In a moment alone with the girls, Aunt Betty tells them what’s really going on. Because she didn’t trust banks, Aunt Betty stashed her money in a secret hiding place. Only problem—it’s so secret, she can’t remember where that hiding place is! That’s what she’s been doing all around town—looking for her fortune. Can Ginger and Payton help find the money in the City of Light—and give Aunt Betty the Hollywood ending that she deserves?

Notes from Cindy Callaghan about LOST IN HOLLYWOOD

Why Hollywood?  Personally, I love Hollywood.  While in school at USC, I wondered around the streets in awe.  Of what exactly?  I’m not exactly sure.  But, I’m intrigued by the Golden Age of Hollywood and if I had a time machine I would love to be in the midst of Marilyn, Joan, Cary, Bette, Lucille and their ilk.  I don’t much believe it past lives, but if I did, I would venture to guess that I lived in that era.

Even now when I’m in town, I put my head down and jump on a Hop On/Hop Off bus tour to hear the same stories again and again.

Throughout LOST IN HOLLYWOOD you’ll notice nods to some of the greats.