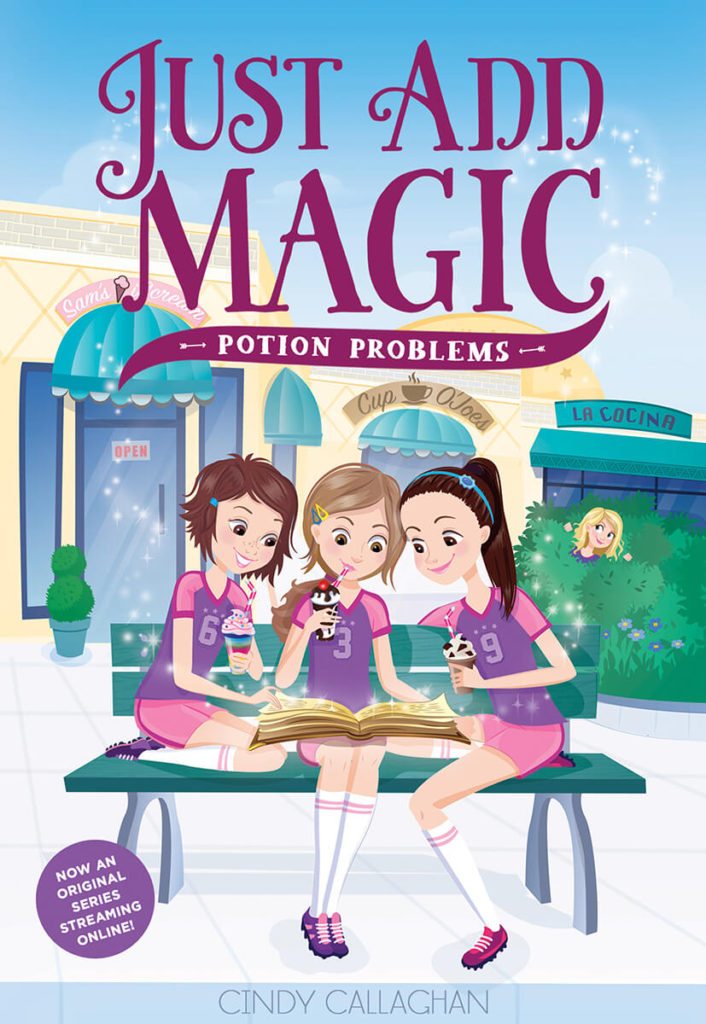 Kelly Quinn and her friends must figure out a way to save a beloved local store and find their infamous Secret Recipe Book, which has gone missing in this sequel to Just Add Magic (the inspiration for the family-friendly TV series)!

Kelly Quinn and her best friends, Darbie and Hannah, are having the worst day ever! Their Secret Recipe Book accidentally gets included in frenemy, Charlotte’s used book drive. Not good.
As if that’s not enough, the girls find out that their cooking program is on the chopping block at school, thanks to big budget cuts.

Kelly & Company decide to take matters into their own hands and apply for famous TV chef Felice Foudini’s Recipe Challenge. The prize? $10,000 and webisodes on Felice’s site. With the Book and the special ingredients from their beloved mentor, Senora Perez’s, store LaCucina, the girls are sure to win.

But when they turn to Senora Perez, for help, they discover La Cucina is in danger of closing!

Then Kelly gets a mysterious delivery—a package with the missing Secret Recipe Book with a note: “From KE.” KE is one of the Book’s authors, but who is KE exactly?

It’s up to Kelly, Darbie, and Hannah to get to the bottom of the mystery, save the cooking program, and help Senora P. keep her store!

The original JUST ADD MAGIC book was always written to be part of the story.  I was so happy that eight years after its publication to be able to finally tell readers the rest of the story and tie up all the loose ends.  In POTION PROBLEMS the whole gang is back together: Kelly, Darbie, Hannah, the cute Rusamano twins, Charlotte, Senora Perez, Mrs. Silvers and of course the Felice Foudini.  And we’re introduced to a few new friends including Evan and the quirky Aunt Aggie.  Readers learn the origin of the secret recipe book and why Kelly is so special.  The friends leave Wilmington, Delaware and travel to Salem, Mass to find out where the story began.

I especially love how we learn more about Charlotte… But, no spoilers here…

Trivia:  Felice Foudini was inspired by one of my TV faces, Rachael Ray.