The Luck O’ the Irish

Poor Meghan McGlinchy: she’s super-duper-superstitious, and holds her good luck charms close, and even she winds up cursed by a silly chain letter. At least she gets an awesome international adventure out of trying to fix it in Lost In Ireland! That’s kinda lucky, right? 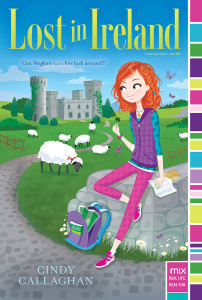 Speaking of lucky, we’ve all heard of the “luck o’ the Irish.” Every culture has their own symbols and beliefs about luck, but Ireland seems to have A LOT of them, and tons of people around the world are drawn to some of the most common Irish good luck charms and tales. Let’s cover some of the big ones, shall we?

The Four Leaf Clover– First of all, let’s talk pure numbers: the chances of finding a four-leaf clover have been estimated at one in 10,000! With those odds, it’s hard not to agree that finding one means the odds (and luck!) are in your favor. 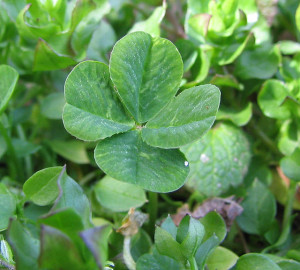 A four leaf clover in the wild!

Christian legend holds that the Garden of Eden was populated with four-leaf clovers, and Eve took one with her when she left. Anyone who finds one now is holding a little piece of paradise! 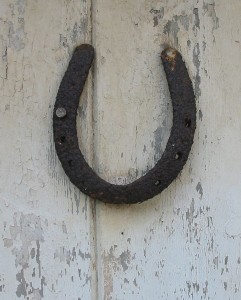 An iron horseshoe, positioned points up so luck will collect in the center!

Horseshoes– There are fewer origin stories for this one, but the consensus seems to be that the lucky horseshoe originated from a myth about Saint Dunstan and the Devil. Dunstan was a blacksmith. When he was asked to reshoe the Devil’s horse, he nailed a horseshoe to the Devil’s hoof instead. This caused the Devil great pain, and Dunstan only agreed to remove the shoe and release the Devil after the Devil promised never to enter a place where a horseshoe is hung over the door. Thus, hanging a horseshoe over y

our door wards off the Devil!

The Blarney Stone– One early explanation of why kissing the Blarney Stone brings luck (or more specifically, the “gift of gab,” which means you talk a lot) involves the man who built Blarney Castle and a goddess. He asked her for help with a legal problem. The goddess told him to kiss the first stone he found on the way to court before his trial. He did! And he successfully won his case, so he incorporated the lucky stone into his castle. Although kissing the Blarney Stone is a time-honored tradition, its placement at Castle Blarney makes it a very dangerous one! You can see photos of tourists taking the risk on Castle Blarney’s website. 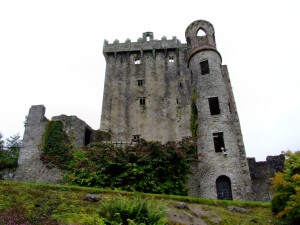 See that little archway in the center of the main structure, waaaaaay up top? That’s where the stone is. Yikes! Even if you’re not afraid of heights, that’s quite a ways up there!