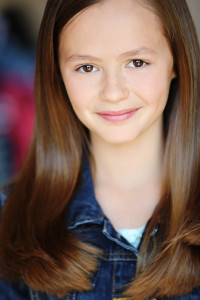 Hi! I have my new friend Olivia Sanabia with me today. We’re just chatting over the most insanely amazing hot cocoa….Okay, so I have hot cocoa in Delaware, and she has chocolate milk in California.

CINDY: Hi Olivia! I’m so excited to talk to you and so, so psyched for the pilot!!! It seems like forever ago that I met you in LA for the filming. BTW, you were so nice to my daughter. She thinks you’re awesome!

OLIVIA: Thank you! It was so nice to meet your daughter! That’s so sweet! I am so excited about the pilot too! I have been really anxious for it to come out! I can’t believe it’s here!

So, for blog readers, Olivia plays the part of Kelly Quinn in the pilot of Just Add Magic. And, as you can imagine, this character is very special to me. I was a combo of nervous and excited when she was going to “come to life.” But, once I saw Olivia in action, any anxiety I had just melted away.

Let’s get to the interview:

CINDY: So, Olivia, Are you similar to Kelly Quinn? If so, how or how not so much?

OLIVIA: I relate to my character Kelly Quinn in many ways. Such as my family, friends and doing what is right are some of the most important aspects to my life, just like Kelly.

CINDY: Was it fun taking a book to the screen? How is it different than acting in a film that is not based on a book?

OLIVIA: Yes, It was very fun bringing the words from a book to life and creating Kelly Quinn based on the description of her in Just add Magic, the book. It’s different from a film that’s not based on a book, because it gives me a hint of who she is to help me grasp a bit of the character, which I can then build off of. I’m starting on a blank page when there’s no book to influence my choice of the direction of the character.

CINDY: What was your favorite part about working on Just Add Magic?

OLIVIA: I had such an amazing time working on the set of Just Add Magic. It was such a great experience, so I can’t name just one. But I will tell you some of my favorites: They were the awesome cast and crew, the unique characters, and all the kindness and support throughout the whole process (and of course the delicious cakes, tarts, brownies).

CINDY: Oh yeah. Love those sweet treats. Which was your favorite secret recipe?

OLIVIA: The Hazelnut Healing Tart recipe was definitely my favorite. Once people watch the show, they’ll understand why. :)

CINDY: I think it’s so interesting that you’re acting at such a young age. How did you get into it?

OLIVIA: I began singing at a very young age, and I soon became interested in theater. After doing several performances in musicals, I discovered that I wanted to be on television and film. So, I pursued the acting business, and I love it!

CINDY: What is your favorite part about being an actress?

OLIVIA: I love so many things. I love that there is never going to be one character that is exactly the same to portray, just like how one human being will never be the same as another. I love learning new tips, ways to make more honesty in my work, and ways to succeed in what I aspire to do. I love creating new friendships. There is nothing like having a friend who has the same interests and understands the ups and downs of the acting business. I love being an actress!

CINDY: What is your dream role?

OLIVIA: My dream role would be to have a strong, leading role in a feature film. My dream role also includes my character having the ability to move people in a way that can change people’s perspectives. I also dream of working along side very experienced actors.

CINDY: Which famous actors or actresses do you look up to?

OLIVIA: I look up to many actresses, but there are a few in particular that I admire. I look up to Jennifer Lawrence because of the honesty and truth in all of her work. I also admire a few actresses closer to my age, which are Bailee Madison & Joey King.

OLIVIA: Yes, I love to cook. My favorite thing to make is a Panini with pesto, mozzarella and tomatoes! I also love to bake cupcakes, cookies and pumpkin bread! As you can tell I have a big sweet tooth!

CINDY: That all sounds so good. Next time I’m in LA, you are definitely cooking for me!! Okay, last question: If you could have any magical power, what would it be?

OLIVIA: I would choose to have the magical power to cure children and adults with terminal illnesses and bless everyone with good health.

CINDY: WOW! That is an amazing answer Olivia. One of the things that struck me about you when we met was your maturity. The answer to that question demonstrates what I saw.

Olivia, thanks for taking time out of your schedule to chat with me. I am so happy that I’ve met you, and I hope we can stay in touch. And, of course, I wish you much success in your career, which I think is going to be HUGE!