on careerauthors.com: How to Write a Book-to-Screen Proposal

A big Thank You to friends at careerauthors.com for running this article. 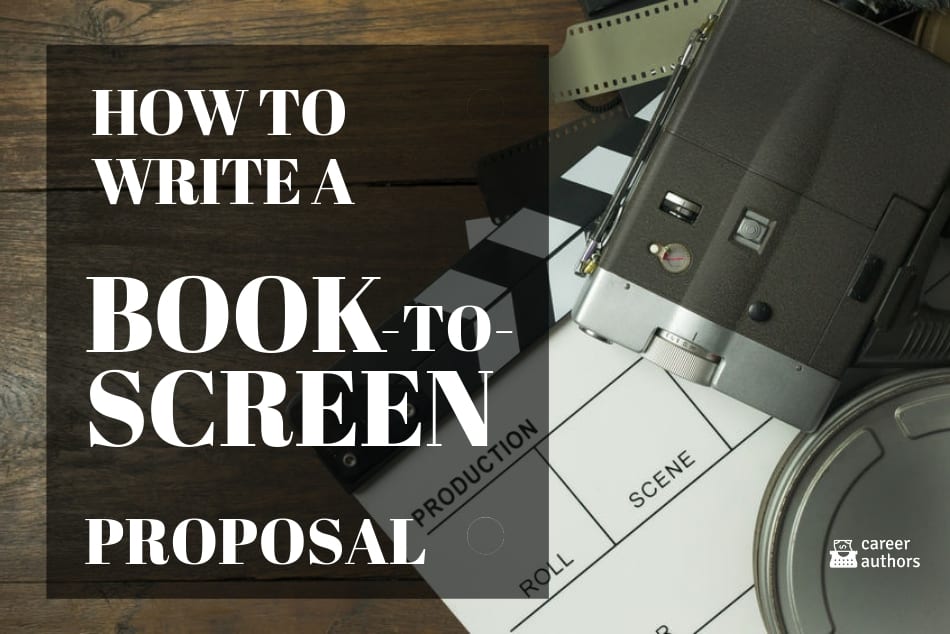 How to Write a Book-to-Screen Proposal

You’ve written a book. You want it to go to the movies, or TV. Now what? If you’re thinking of Book-to-Screen, you’ll need a few new tools in your box. First—and ultra-necessary, the Proposal.

Let’s think about a proposal, the romantic kind

CHARACTER ONE Will you?(dramatic pause)

CHARACTER TWO Yes, yes I will!

That’s exactly what the career author wants. “Yes!”—from a studio or producer.

I’ve tiptoed in the book-to-screen and original-to-screen world for a little while. In 2013 my first book Just Add Magic was optioned by then new-to-the-scene Amazon Studios. A pilot was developed and a series was greenlit. That show recently entered its fourth season. In 2016 I went on my first LA roadshow of meet and greets, and an encore in 2017. The 2017 venture yielded an option for my 2020 book Saltwater Secrets.

I attribute this success to many things, one of which is my pitch, specifically the TV/film proposal. In this article, I’ll share tips on this tool, which is not only critical for your book to leap into the screen, but also sharpens your novel-writing.

What is a TV/Film proposal?

A proposal is a communication tool, a selling document whose purpose is to briefly explain your concept and how it fits perfectly into your target’s programming or demographic. The proposal is one of many tools used to pitch an idea.

A pitch can take many forms, such as, but not limited to, the documents below. Before you read on, I want to point out that these are definitions that I created, not from a dictionary or textbook. This is how I’ve distinguished between tools, and experts may disagree with my explanation of each. I’ve found that these terms are often interchanged and can be used in multiple combinations or sequences.

A detailed lengthy (20–50 pages) document outlining your concept and its execution. This is perhaps the most common tool, and the term is used loosely to describe shorter pitch communications documents. Many resources exist on-line regarding treatment creation and various formats.

A verbal pitch that effortlessly rolls off your tongue. The irony is that it takes great effort for each deliberately chosen word to casually drip from your lips with proper inflection, pauses and tone. In my non-film world, I refer to this as the elevator speech. As in, “Sell me by the time the elevator reaches my floor.” When I teach elevator pitching, I stress delivery as much as content. This is your chance not only to communicate your amazing idea, but also to pass the likability test. The likability test, btw, is a test that you never know you’re taking, but trust me you are—all the time—with every interaction.

This is used during a sit-down meeting and makes your treatment visual; think PowerPoint. While showing your slides, you verbally expand upon your cocktail speech to paint an attractive and exciting picture of your concept. Delivery and likability are key here.

A brief (7–10 pages) written selling tool to communicate your concept to determine the interest of your key targets. By targets, I mean those studios that you believe are a good match with your project. You know the good targets, because you’ve done your research and studied their past and current programming. You’ve noted their trends, and your project is consistent. For example, you wouldn’t pitch Game of Thrones to Disney. If you’re working with an agent, s/he may advise you about what specific studios or executives seek.

I’ve been using the proposal in two ways:   To pitch my published or pre-pubbed novels, and to pitch original concepts.

I’ll discuss the proposal in the context of selling a concept or property to Hollywood; this tool can sharpen the novel writing process. In my case, the process of crafting proposals has helped my novel-writing as it pertains to scene order and scene construction.

I choose to start my novel with the scene I believe would be the opening of a film, and I cut chapters where there would be a commercial break—in a way that makes the viewer want to come back after the ads, or the reader to turn to the next chapter. I recently worked on a proposal for a book that I’d written but not yet sold. When crafting the movie proposal, I started the story in a different place. I decided that start place was better and then mirrored it in the draft novel, which I believe has improved the draft.

These are what I would consider the obligatory sections of the proposal:

As in journalism, you start with your headline, the most important and most informative line(s), your logline. A logline is a short summary (1–2 sentences) of a TV show, movie or book. This is one line used to communicate so much: the central conflict, plot basics and tone.

Here are some examples:

Following the logline is the concept. This takes my logline and expands it into a few more sentences, widening my funnel, to paint a slightly bigger picture. Think of this as a process of dropping breadcrumbs or reeling someone in. The concept may likely include comps—that is, comparative titles: “The Goonies meets Twilight.”

The order of the next sections of the document can and should vary to best communicate your project. I often go into characters next, but setting might be the more logical breadcrumb for you to drop next.

I break characters into categories, not order of appearance. For example, my ideas are teen/’tween, so I usually start with a section called, “The kids.” Starting with the main character and using the funnel concept again, I describe the character in 1–3 words, e.g., Spoiled rich girl, the geek. Of course, your characters are complex and deserve more than these few cliche words, but this gives the exec a general idea of who’s who. Thereafter, I briefly describe each: emotional situation, desire, appearance, etc. I often add a reference. For example, “Think Zack Efron in High School Musical.” “Think John Candy.” “Think boy Luna Lovejoy wearing roller skates.”

Setting describes your project’s the physical locations and time period(s). For this, I reverse my funnel and start at a macro level, like the town, then drill into 1–3 key locations in the TV series or film, e.g., the school, the tree fort, and the ice cream shop.

Probably the most difficult and time-consuming of your tasks, this may be the outline of the film or the outline of the pilot episode. Trying to be brief, I break this into sections: opening (or “teaser”), beginning, middle and end. In prose, I describe each section of the project. This is similar to what many consider to be the most dreaded literary task, a book synopsis. It’s difficult, but very important. This is your story and how it unfolds for the viewer. You need to be brief, but give enough pixels for the executive to create a good image in his/her head. Ideally, it’s the same image that’s in your head.

For a TV show, I then do the season arc—a description of how, episodically, the narrative continues and wraps up over the course of the season.

Arc is followed by ideas for episodes—this may be 1–2 sentences or a few paragraphs about the 10- or 12-episode series. For a movie, I may detail sequel possibilities; that is, what I envision as the next chapter of this film.

You may have other sections, as dictated by your project. For example, one of my concepts involves a board game. I include a brief section called how the game works, and it’s placed in the proposal where I think that information is most likely needed as the next breadcrumb.

I often add a section pertaining to why I think it will appeal to this target’s audience(s). In my case, it’s important that a teen/’tween appeal to kids while also being parent-approvable. I call this co-viewing appeal.

Since executives think about return on investments and franchises, I often add some additional detail regarding digital pull-through and merchandising if I have some interesting ideas for either.

Things I don’t include

I don’t include anything regarding camera angles, actor/actress recommendations, director wish-lists or sections of the screenplay. Of course, if you’re lucky enough to already have celebrity commitment to the project, or director interest, that may be appropriate for you to include. I also don’t include my bio herein. That’s a separate document.

You’re wondering how you’re going to fit all this in 7–10 pages, which brings me to brevity. This document is likely single-spaced with plenty of white space. It contains lots of information, but it’s super easy to read. It’s a delicate balance to adequately communicate the project, its tone and what’s special in as few words as possible. This makes word selection and choice very important.

Advice for brevity? When you think you’re done, let the project sit for a day or three, and challenge yourself to say everything you’ve said in fewer words.

Is there a paragraph you don’t need? Is there a sentence that says the same thing as the prior? What words are extra fluff and really not needed? Get this sucker tight!

I’d like to conclude with a word about quality. This is an official business communication. Everything about it needs to be professional. Have it reviewed and critiqued by multiple different people for clarity. Then have it professionally proof-read/edited. Spend the money. If this is a 7–10 page document, it won’t cost much. And, trust me, you most likely DO have a typo. If you’re anything like me, you have a bunch that you can’t see.

Character One’s got it easy with a two-word proposal, huh? “Will you?”

The film/TV proposal, while short, takes time and hard work to craft. Don’t rush, because your concept is worth taking time to pitch well. If you mold your amazing idea into a convincing proposal to the right target at the right time, you may transform your writing path to straddle both book and screen. Got questions? Let’s chat on the Career Authors Facebook page. Cindy Callaghan is the award-winning author of two ‘tween series: The mega-popular Just Add Magic and Just Add Magic 2: Potion Problems, the five Lost in books: London, Ireland, Paris, Rome, and Hollywood, and two stand-alones: the award-winning Sydney MacKenzie Knocks ‘Em Dead and Saltwater Secrets (2020). Cindy’s first book, the much-loved Just Add Magic, is now a breakout Amazon Original live-action series in its third season. And the upcoming Saltwater Secrets is set up at a major studio. The Delawarian (by way of Los Angeles (USC)) is a Jersey girl at heart. She lives in Wilmington and escapes to her PA mountain retreat whenever time will allow. Potion Problems is now an Agatha Nominee for Best Young Adult Mystery.