Recent interview with the Rambunctious Readers

The Rambunctious Readers are so excited to interview author Cindy Callaghan  about her latest book, Lost in London. 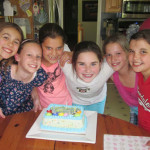 RR: How did you get the idea of getting trapped in a store overnight in Daphnes?
Cindy:  Did you ever read The Mixed Up Files?  In that they get locked in a museum.  I love that book and ever since I read it I’ve ben obsessed with places that I’d love to spend the night:  A bakery, hair salon, carnival….and DAPHNE’s is like allllll of those places wrapped up in one.  Don’t you think?
RR:  How did you come up with the names of the characters?
Cindy: The perfect character name is very important to me.  It has to “fit” the character I am trying to paint.  I can’t really explain it exactly, but I know it when I find it.  Sometimes a character is just called X until I can think of the perfect name.
RR:  How did you come up with Jordan’s friends personalities and characteristics?
Cindy:  I like to have a cast of characters that are different from one another, because that’s how friends are in real life, right?  If everyone was the same, that would be so boring.  I try to think of different quirks.  I get a lot of them from listening and watching other people.
RR:  Did you base any of the characters on anyone you know?
Cindy:  I don’t base a character 100% on someone that I know, but I might take a trait or characteristic that I know or like about someone and give it to a character along with a bunch of made up stuff and characteristics from someone else.  They are kind of like montages of all different people.
RR:  How do you come up with so many creative ideas for all of your books?
Cindy:  I suffer from something called Too Many Idea Syndrome.  I have an idea notebook just filled with ideas that I want to write about.  When I think of something, I put it in my notebook.  I could never write all of my ideas in a hundred lifetimes.
RR:  When will your next book becoming out and what is it about?
Cindy:  LUCKY ME comes out July, 2014.  It’s about superstitious Meghan McGlinchey who gets cursed when she goofs up a chain letter.  Unraveling the curse takes her on an amazing journey where she discovers a lot more than links of a chain. It’s a very cool story that takes place in southern Ireland.
Spread the love
Cindy Callaghan2014-01-10T21:58:55+00:00January 10th, 2014|