Review of Hunger Games – all new!

I tend to avoid books that are “all the rage” because I’m usually disappointed. But, I downloaded Hunger Games into my Kindle, and I couldn’t put it down. I read it in about four days. Although this book is marketed to Young Adults, it is very adult-themed. I’ve spoken to some 12 year old boys who read it and really liked it. My theory is “if it gets ‘em reading, it’s a good thing.” But, I’d feel negligent if I didn’t point out that the premise of this book is quite violent. It is for older tweens/teens, and will appeal to boys as well as girls, where most of the stuff I read and comment on is girly only.  As an adult, I really liked this book and highly recommend it.

From Wikipedia: It introduces sixteen-year-old Katniss Everdeen, who lives in a post-apocalyptic world in the country of Panem where North America once stood. This is where a powerful government working in a central city called the Capitol holds power. In the book, the Hunger Games are an annual televised event where the Capitol chooses one boy and one girl from each district to fight each other. The purpose of the Hunger Games is to show how no one, including children, is above the Capitol’s power. The last person standing wins the game. 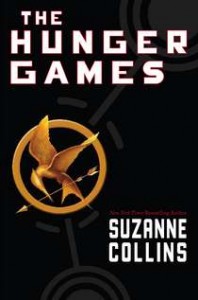